A holiday can change everything! 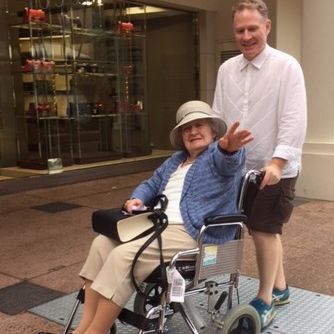 One families persistance to take a parent (in hospital level care) overseas - reaps more rewards than just a suntan!

What do you do if a 'dependent' family member would like to fly back over to the same place overseas that she used to visit with her late husband for more than 20 years? Well, the answer might be obvious, but not everyone is likely to feel the same way.

For one family, it took several months to get people to accept the idea that a resident in hospital level agedcare - who, according to the rules, requires two people to transition her and is on a pureed diet due to possible 'aspirating' issues - really did want to go on holiday...

So what do you do?

To try to make this dream become a reality, one family found that many people are reluctant to advise on how to take elderly family members (that are maybe resthome/hospital level care) away on holiday.

The following details some of this families experiences, along with hints and tips that they've learnt in taking the opportunity of 'another trip down memory lane' and make the most of the time with those that once looked after you.

"For our parents, Surfers Paradise on the Gold Coast held many, many memories.

Dad had worked long and hard for years to take us to Surfers during our teenage years, and then later, find a place on the Gold Coast to escape the cold Christchurch winters each year when they retired. It wasn't a flash apartment - but it was somewhere that they could call home in Winter.

With mum's health taking a blow in 2010 with an aneurism - and then 4 months of PMH rehab to literally help her back on to her feet - we knew the opportunity for them both to enjoy going overseas was diminishing. So we encouraged them to head back over one more time.

Everything was looking good. I had flown back over with mum and dad and made sure they had settled in properly. After a week I flew back home. However, by the third week mum had started to have episodes of passing out. Dad had already called the local doctor out twice and ordered an ambulance (at a cost of a AUS$1000 per call out).

By the second hospital visit - my brother had arrived from London to bring them back home to Christchurch. But the situation was such that now both dad and my brother were suggesting I fly back over to see mum. It was starting to look touch and go - and the doctors could not work out what was wrong...

...until one doctor asked for a complete history review of her medications - and there it was.

The problem. Mum's medications had been changed less than one week prior to flying over to Australia - the result of which did not start to show until three and a half weeks later.

Tip: If a medication change is required before traveling - make sure they are clearly noted.

Mum's meds were immediately changed back and the passing out episodes stopped. But the trip had not been the success that we wanted for them.

4 years later - and with dad's passing - mum was now in hospital care without her husband of 47+ years.

"So, if we could take you on holiday, where would you like to go, mum?" was the question I asked one day. "Gold Coast" was the answer that came straight back from mum.

After asking this question in different ways over the following 6 weeks, including offering local places to go - the answer was always the same.

The next step of getting people on board with the idea - was our first challenge. Here are some of the types of concerns that were expressed...

• Economy seating on planes won't work for her.
• Who's going to help shower your mum?
• How is she going to get in and out of the shower? (mum needed to be seated when showering)
• Bowel motions are very inconsistant. How will you cope if your mother soils herself while on the plane?
• She will get very tired very quickly.
• Older people don't always enjoy the same things that they used too.
• Who will manage her medication?
• You know we have to use a hoist to transfer her. How are you going to do that on holiday?
• You won't be able to get travel insurance for her
• Your mum is on a pureed diet. How will you manage that?

Now for someone who sees the glass completely full - these 'worries' become tiresome - and yet they were a necessary part of making sure we had as many 'situations' covered, as possible.

Our Solutions...
- Airlines actually have good processes in place and you don't have to fly business class to have a seat that works for someone in a wheel chair.

- We found a contract care agency (Christchurch Nursing Bureau) that were extremely helpful and matched us up with the ideal carer for us, at a very reasonable rate.

- We found out where a local care agency was and that we could arrange extra care quickly, if required.

- Incontinence products were used - and double layered for the flight.

- We didn't worry about travelling with no travel insurance. There are some insurance companies that offer travel insurance to over 80's - however, for us, we were happy to risk it. Australia and NZ have very good health exchange systems - so even if mum had to go to hospital, the cost would be covered... and the reality is very few people ever claim on their travel insurance.

The outcome...
The trip was a huge success.

Yes, mum did tire. So we made sure she had longer afternoon sleeps and let her sleep in more in the mornings.
We never pureed any of mums meals. She never had a coughing / choking fit while eating food, and the result was she 'loved' the food. And bowel motions became consistent - something that hadn't happened for months while in care.

But what if? Yes, for us, the trip couldn't have really gone much better. However, it could be said that we were just 'lucky' - that nothing serious eventuated - no slips or falls - so maybe this was just a 'fluke'?

Yet, while we planned this trip we continually asked ourselves 'what if?' - actually we had enough people around us asking that question - that we had plenty of resource to work with - and we allowed plenty of time to pass and discussion to happen before taking off overseas. It did take time & preparation for the trip (including help from the wonderful carers at the aged care facility) but the experience was more than worth it. And, if we were to go on another trip, the planning would be much simpler - having already completed this trip.

...and yes, mum is already eyeing up her next trip - a boat cruise for next year!

If you have family that are in aged care and you know they would love to go back to a place they used to visit - or just for one last escape - but you're wondering how that would happen and could it work - hopefully this has given you some thoughts on how a holiday can be achieved or at least encourage you to explore the idea further.